Help us out by adding any karaoke shows that you know about!

Most common in western countries, especially the United States and Canada, karaoke is done in public, usually in a bar, restaurant, or hall.  There may or may not be a cover charge to enter the venue, but to sing a karaoke song is usually free to those in the venue.  Typically, there will be a karaoke host(s) that bring their own karaoke equipment.  They will usually provide books with lists of songs or have a list of their songs online.  Individual people or groups of people who want to sing will submit a song request and when it is their turn, the host will call them up to sing.  There may or may not be a stage and/or dancing.

In the west, it is more common to have public karaoke shows.  Many bars and restaurants will have a karaoke night (or multiple nights) where they pay for a host, commonly called a KJ (Karaoke Jockey) to run a public karaoke show.  Usually, the host will supply the karaoke equipment, but some places have their own systems.  These public shows may or may not have a theme.  Some themes are hip-hop karaoke, country karaoke, 1980s karaoke, 1990s karaoke, etc.  There may or may not be a cover charge to enter the bar or restaurant.  There may also be a minimum charge for the evening.  These charges are usually used to cover the cost of the host.  These days KJs will have hundreds of thousands of songs to choose from.  They used to print out huge paper binders of song lists, but now it is rare to see books as people can find songs online using their cellphones.  Typically, in these public karaoke shows, singer will have to fill out a slip of paper providing the KJ with their name, their song selection, and the artist who sang the song.  Many songs have been done by more than one artist so in order to get the version you want, that is why they ask for the artist of the song.  Singers wil then give their request slip to the KJ who will add them to the 'rotation' of karaoke singers.  Most KJs go in order of who hands in slips first.  The KJ will then call up each singer in order who will perform their song to the whole bar or restaurant.  On average it takes about 4-5 minutes per song so there are usually only about 15 singers an hours that will sing in a public karaoke.  Some public karaokes can get 50 or more singers in the rotation so you may only get one or two songs in an evening.  If the venue is small and there aren't a lot of singer you may get upwards of 7-10 songs in an evening.  Public karaoke shows are gaining in popularity around the world because they are so fun and can generate extra income for bars and restaurants on slow nights! 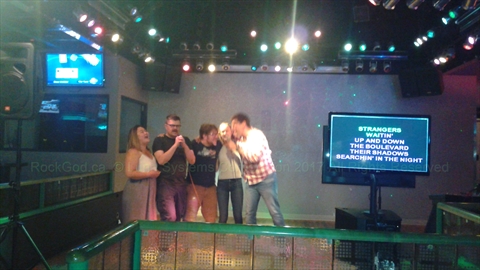 Mostly in Asia and non-western countries, especially Japan where karaoke started, typically karaoke is done in private rooms.  Rooms are sometimes called Karaoke Boxes.  Establishments will have from 1 to many small karaoke rooms where you can perform karaoke with your group of friends or colleagues.  Usually, the rooms only accomodate up to about 10 people.  There is usually a fee to rent the room or an hourly fee to use the room.  There may be hosts or hostesses to serve you food and drinks.  Each room would be equiped with a karaoke system consisting of a screen or TV, microphones, and a karaoke unit which allows you to select from thousands of karaoke songs to sing.  Usually, you can sing many songs in the time that you are in a private room karaoke because there will only be a few people singing compared to a public karaoke show. 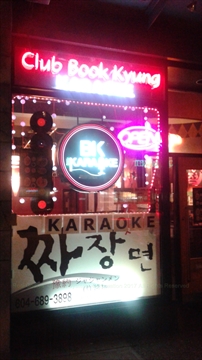 Some public karaoke shows have a theme.  Even if the show you go to doesn't have a theme, you can make up your own theme.  We knew some people who made up their own themes every week.  We especially loved it when they did the 'Back to the Future' and 'Top Gun' movie soundtracks themes!  Here are some of the themes that you might encounter if you go to a public karaoke show.

For Live Bank Karaoke themed karaoke you will have an actual live band to sing with.  Typically, they will have a smaller selection of songs that you can sing to.  Also, it is much harder to sing along with a band than to sing without one, so be warned!  This is fun though and can give you experience singing with a live band!

For Hip Hop Karaoke, you are encouraged or required to sing hip hop songs.

For the Karate karoake theme, people compete to earn their karate belts.  The goal is to earn your black belt!

For 80's Karaoke themed karaoke you are encouraged or required to sing songs from the 1980's.

For Country Karaoke themed karaoke you are encouraged or required to sing country music songs.

We try to list as many karaoke shows as we can.  We rely heavily on our users to keep us informed of shows.

ADD A KARAOKE SHOW TO THE LISTINGS